Last week I had the amazing opportunity to attend the ACM-W Europe womENcourage Celebration of Women in Computing, which was held in Uppsala (Sweden) during September 24-26th. I was granted one of the scholarships to attend the conference, and I also had an accepted paper to be presented during the celebration. The paper was about our work at FutureLab on the creation of digital playful experiences for animals, and it really had good acceptance between the public!

The conference was really interesting and offered technical as well as industry talks, renowned keynote speakers, workshops, discussion forums and a lots of networking opportunities! The first day started with a Hackaton, a Career Fair and a Poster session at Norrlands Nation building. During the Career Fair, companies such as Google, Facebook, Microsoft or Intel were offering advice and information about internship/permanent positions, as well as the roles they offer to computer scientists and engineers.

The second and third day of the conference took place in an outstanding setting: Uppsala’s main university building. The conference was opened by Alexander Wolf, ACM’s President, followed by a keynote by Vicki Hanson, ACM’s Vice President and distinguished researcher within the Human Computer Interaction field.

After the coffee break, attendants could choose between many options, and I personally attended an ACM-W volunteer workshop with George Eleftherakis. George explained the role of ACM and ACM-W chapters, and the importance of having student chapters at universities to promote the role of computer scientists as well as encourage women in engineering careers. Some other initiatives were discussed, such as having mentoring programs for girls or talks to high school students, and also George highlighted how being part of an ACM student chapter can improve the students’ soft skills.

In the afternoon there were more paper sessions, talks and workshops, and a session on case studies. The attendants were divided into groups to discuss about how to handle a controversial situation (gender positive/negative discrimination, harassment, under estimation of abilities, ethics, etc). After that initial discussion they had to present a summary to the other groups as well as the causes and consequences of taking action or not, so everyone could discuss how to better handle such situations. Lots of different opinions were given in each case study, and it was a really nice forum to see other perspectives, some of them from the male attendants who were really inspiring and suportive. It was a true womENcouraging experience, as the main feeling and common opinion among all discussions was that women should never feel themselves underestimated, no matter what others believe/express. 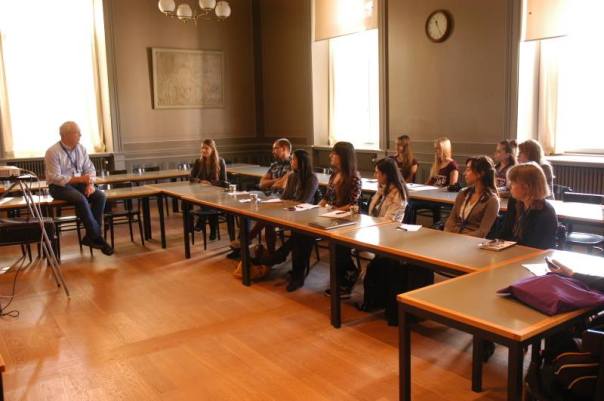 The last day of the conference started with Valerie Barr’s introduction to what ACM-W, its actions and opportunities and how to be part of it. It continued with an amazing Åsa Cajander’s keynote, in which she shared some personal experiences she had to face during her career as a successful women in computer science. She encouraged all women and men in the room to take action and have grit to pursue success in your professional field, becoming a role model for others.

Right after it, I had to present my paper within a HCI technical session, and I was really happy that the attendants enjoyed the presentation and found our research very interesting. Most of them did not know about Animal Computer Interaction, so I also tried to give a hint into what researchers are doing in this field and how can it benefit both animals and humans in several areas.

After lunch, we had more workshops and industry talks, as well as an initiative I really appreciated: the unconference. During the previous day, people could leave a post-it on a board proposing interesting topics to discuss about, and you could also post your own one or vote another one’s topic. In the end, the most voted topics were selected and several discussion rooms were prepared, so everyone could join the one they preferred. I assisted to the “Career Strategy” session, were both professionals and students shared their experiences and doubts to the others so we could help each other with our personal experience. 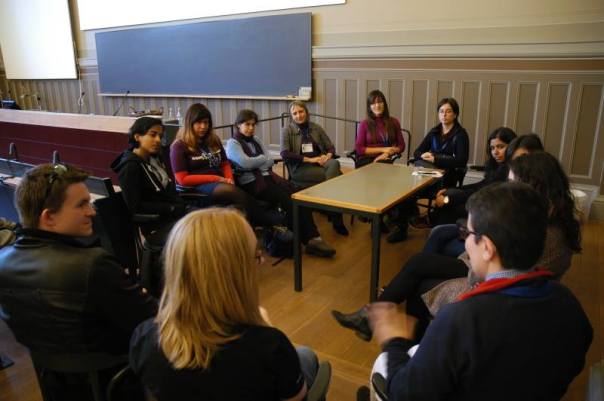 The conference was closed with an impressive talk by Marie-Paule Cani about her work on 3D modelling. She showed us some examples of their research, prior, current and future work, and I believe all the attendants were surprised by the innovative ideas they were proposing and how the field of 3D modelling is evolving.

In summary, it has been a wonderful experience I would recommend to all women in STEM! I would personally love to attend the following womENcourages and moreover, I would like to see more men involved in this kind of events. Their presence was supportive for women as we felt more understood within our field, men were more aware of how to take action to promote the role of women in CS and they also gave really interesting points of view we should definitely consider.

And finally, here you can see a picture of all the scholarship winners who could attend the conference thanks to the supporter organizations – I’m on 3rd row in the middle of the picture 🙂 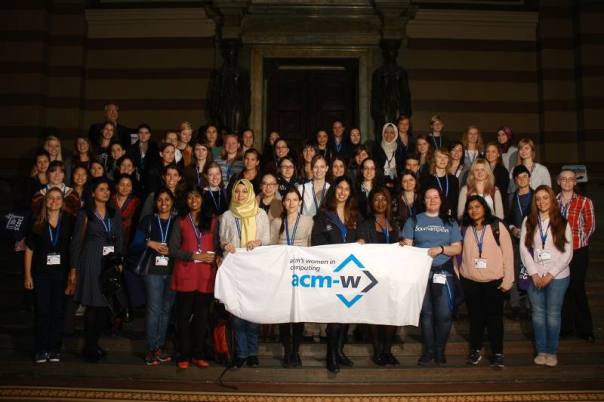